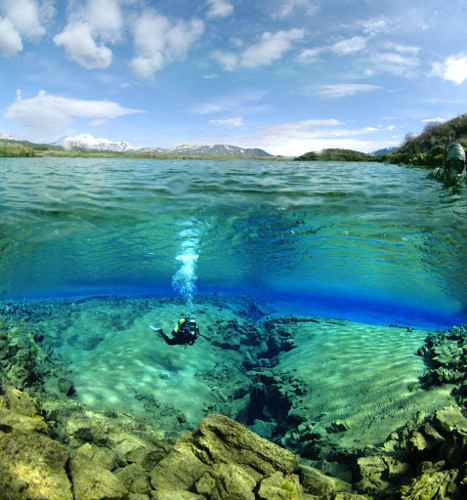 Lists of weird and wonderful diving destinations tend to feature fascinating accounts of ice-diving in Antarctica or spectacular sink holes that exceed the limits of recreational diving, but what about the unusual dive sites that stay within the safety limits, the ones that you could experience on a dive holiday this year?

This protected marine park is often hailed as the number one Maldives diving site, and at nighttime it takes on a truly magical quality. Subject to changeable currents, the marine life here can vary from dive to dive, but expect to see ghost pipefish and cleaner shrimps glowing in your torch beam, giant turtles snoozing in caves and white tip sharks hunting neon fusiliers – don’t forget your camera!

In the North Atlantic Ocean, where the Eurasian plate meets the North American Plate, the Silfra fissure offers the only place in the world, where you can dive between two continents. Where the two plates diverge, divers can explore a crack in the earth where the low water temperatures and natural filters give way to unbelievable visibility, and water that is so pure that it’s safe enough to drink. See silver sulphur bubbles escaping from the earth’s crust, explore caves and caverns and descend beneath the sulphur-covered rocks to discover barrel sponges and black tipped reef sharks.

Completed in late 2010, Cancun’s Museum of Underwater Modern Art is made up of more than 403 individually caste sculptures, forming one of the largest artificial reefs in the world. Created by British sculptor Jason de Caires Taylor, the museum was created at a cost of 350,000 US dollars, in an attempt to relieve the pressure on the natural reefs in Cancun’s National Marine Park. Made using a special cement mix that will encourage coral growth, the sculptures will change over time and become a new habitat for marine life.

This underwater volcano lies just off Mahengetang Island in Indonesia, and rises for more than 400 metres from the seabed. You’ll be able to smell the sulphur as soon as your dive boat nears the site and, at low tide, one of the volcano’s two pinnacles can sometimes be seen from the surface. With water temperatures around 37-38 degrees Celsius, and hot sand and water bubbling out of the vent, exposure suits are essential. Expect to find an overwhelming concentration of pristine marine life, including immense clams, giant sponges, stunning corals, humphead parrotfish, jacks and huge schools of mackerel.