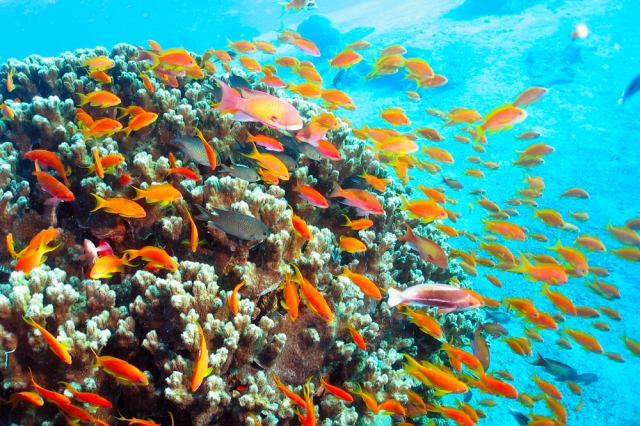 What do the films Indiana Jones and the Last Crusade, Transformers: Revenge of the Fallen and Sinbad and the Eye of the Tiger have in common? The answer is Jordan’s City of Petra. The ancient desert city is used as a setting by each one. More precisely, the famous Al Khazneh temple, Petra’s most iconic building is used and it is one of my favourite places above water to visit. It was carved from the rock face with such intricate detail and it never fails to take my breath away.

Unlike other countries in the Arabic heartlands, Jordan to me, has always seemed a bit more exotic and lushly decorated with ancient history that wasn’t taught in school. Jordan is a place that retains a sense of mystery and exploration and a visit to Jordan is not complete without a bit of exploration. The city of Petra, named the 2nd Wonder of the World by the New7Wonders Foundation in 2007, is part of the Planet Dive Holidays’ ‘Classic Tour’ which also includes a visit to one of the few undiveable seas in the world: The Dead Sea. This salt lake lies over 400 metres below sea level and is so salty that it can hold up the weight of a human, so you float, which is a fascinating experience.

Both Petra and the Dead Sea are experienced on your way south to dive Aqaba, Jordan’s toe hold on the Red Sea. read on…

Aqaba city lies at the very tip of the Gulf of Aqaba, the western fork at the top of the Red Sea, the Gulf of Suez is the other. On Jordan’s western border is Israel and to the east lies Saudi Arabia. The city was captured from the Ottomans during the First World War by the English desert champion Lawrence of Arabia. It is now a thriving city, seaport and holiday destination. The friendliness of Jordanians to westerners meant that Aqaba became one of the first flourishing Red Sea diving resorts. It’s position at the top of the Gulf of Aqaba means it has a small but perfectly formed coastline that consists of many easy to reach shore and boat dives on reef gardens and walls. In recent years, dive centres have been pushing towards the Saudi border and added some new dive sites to the repertoire. Also in the 1990s the authorities decided to help the diving industry and sank a couple of wrecks which include an anti aircraft tank and the wreck of the Cedar Pride.

The Cedar Pride is a must do wreck dive when visiting Jordan. I gasped as I slipped into the water. The entire wreck was visible below me, lying on the seabed like a giant bath toy. She is over 20 years old and has been embraced by the sea. Festooned is an adjective that springs to mind when describing the wreck of the Cedar Pride. She is smothered in brightly coloured soft corals and shrouded in fish. As I reached the seabed at 25m I looked up at the gargantuan side of the ship and saw a swirl of baitfish, fusiliers I think, using the superstructure as cover from a pursuing barracuda that lunged into the mass. The fish scattered and reformed and like a massive snake slithered off onto the reef. The barracuda stayed put, obviously liking its new hunting ground as much as I did.

The Cedar Pride is a beautiful wreck, but not Jordan’s only one. The ‘Tank’, an armoured tracked anti-aircraft vehicle is shallow, but the only thing to stick up from the sparse seabed and so has become good nursery for reef fish and a playground for divers. It’s surprising how much fun you can have on a site you can circumnavigate in a minute, but there is no need to worry about bottom time or air constraints so you can really have some fun, plus the seagrass bed on which the tank sits is home to rays, and critters not often encountered while reef diving.

The Cedar Pride and Tank are the most popular wrecks, but Aqaba is becoming popular as a technical diving resort, which shows the dedication and commitment Jordan has to diving. By it’s very nature, technical diving is meticulous with safety, and that rubs all through the diving industry here.

Jordan is sometimes overlooked by divers as they look at the long Red Sea Egyptian coastline, but the variety of dives in a small area, a chance to visit not one, but two UNESCO World Heritage sites (Petra and the Dead Sea) and the welcoming and friendly nature of the Jordanian’s mean a holiday to Jordan with Planet Dive Holidays is something not to pass up.

You to can take a tour of Jordan including diving the Red Sea and experiencing the world heritage sites of Petra and the Dead Sea with Planet Scuba Holidays.

Kids + diving: all you need to know

How to take your family on a dive holiday